‘Photography has taken me out of my comfort zone, led me around the world, connected me with people, opportunities and helped unlock creativity within me that I never knew existed,’ so describes one of the youngest ever videogame art director’s new-found passion. Born in Edinburgh, educated in computer arts at Dundee’s University of Abertay (a cauldron of videogame talent), transplanted to Canada to work at Ubisoft at the age of 25, Liam Wong was always destined to produce eye-catching work of substance and originality. His videogame work took him for the first time to Tokyo, where he discovered the ethereality of floating worlds and lurid allure of its nocturnal scenes. ‘I got lost in the beauty of Tokyo at night,’ he explains.

When an opportunity to take a break from his design work presented itself, he picked up his camera and headed to Japan in 2015. Through the combination of self-taught camera work, the influence of creative masters such as Syd Mead and Hideo Kojima, his videogame designer’s eye and the development of his own software techniques, he created images that render Tokyo’s particular nightlife in a surreal form all his own.

His visions have earned him global attention from international news outlets, and legions of fans across social media, the videogame world, photographers and designers alike. TO:KY:OO captures a unique body of work by a uniquely talented artist and designer.

A copy of TO:KY:OO, signed by Liam Wong 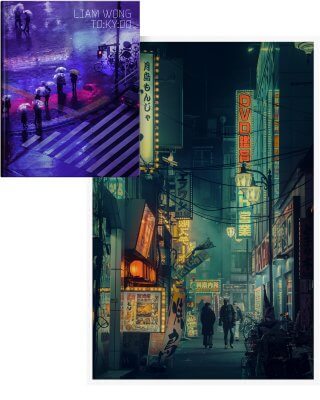 A copy of TO:KY:OO and a 60 x 40 cm print of Memories in Green, both signed by Liam Wong

A deluxe edition of TO:KY:OO, signed by Liam Wong

A signed copy of TO:KY:OO, and a private online workshop with Liam Wong

A signed deluxe edition of TO:KY:OO, signed 60 x 40 cm print of Memories in Green, and a private online workshop with Liam Wong

‘I want to take real moments and transform them into something surreal, to make the viewer question the reality depicted in each photograph. This body of work encompasses my three years as a photographer and ultimately the completion of my debut photo series,’ writes Wong.

A testament to the deep art of colour composition, this publication – art directed by Wong himself and produced to the highest printing standard – brings together a complete and refined body of images that are evocative, timeless and completely transporting. Rounding out the book’s special treatment is the first publication use of the 45/90 font, designed by Henrik Kubel, of London-based A2-TYPE.

The book also features a section that reveals the creative and technical process of Wong’s method, from identifying the right scene to composition, from capturing the essence of a moment to enhancing colour values and deepening an image’s impact – insights are invaluable to admirers and photography enthusiasts alike.

Wong’s grasp of story illustrated as a ‘place to be’ is remarkable. I applaud the balance of brilliant colour, precise placement of picture elements, and the overall exhibition of expert technique.

Volume will produce a deluxe special edition of TO:KY:OO, with an exclusive cover design featuring the phrase ‘the beauty of night’ in Japanese type embossed on real cloth, and housed within a fluorescent plastic slipcase that evokes the neon lightscapes of Tokyo’s nighttime scenes.

This edition is only available during the limited funding period: true fans of Wong’s visions will not want to miss out on this exceptional and covetable production.

Liam’s ‘photos’ are not just photos. In his ‘photos’, you can feel what cannot be normally seen, layered structures of evolutions and decadence of the cities, the atmosphere of the people who had lived and died there. A single ‘photo’ holds a balanced harmony of beauty and the disordered.

To fully enter the world of Wong’s photography, Volume supporters have a variety of ways to participate. The first is with a limited-edition poster, signed by Wong, that will animate any setting or space.

Perhaps the most exceptional offering connected with backers of the book is an opportunity to connect with Liam Wong directly, through a private 30-minute one-on-one online session, to review your own work, to learn insights on techniques and composition, or simply to share experiences of Tokyo with Wong himself. For photography enthusiasts seeking feedback, or for visually minded creatives of any persuasion, an encounter with Wong will surely change the way you see the world. Limited to five backers.

And for those seeking the complete TO:KY:OO package, Volume offers the Works: a signed collector’s edition, signed poster and a one-on-one online session with the master himself.

With an aesthetic inspired by science fiction classic Blade Runner and directors such as Gaspar Noe and Wong Kar-wai, a move into film surely can’t be far away.

Liam Wong is an award-winning art director, currently based in Japan. Graphic Designer, Game Developer and Photographer, he is best known for defining, designing and directing visual identities and was listed as one of Forbes magazine’s influential 30 under 30.