Rudolph de Harak (1924–2002) is one of the most influential modernist graphic designers of the mid-twentieth century. This comprehensive monograph is the first major publication devoted to this fascinating and significant figure in the history of modern graphic design and provides an in-depth account of de Harak’s life and work, from his early years in Los Angeles, California, to his later years of success as a design consultant and educator in New York City. De Harak’s work was highly influenced by early modernist masters, such as Will Burtin, György Kepes, Alvin Lustig, and Max Bill, as well as the rigor, simplicity, and rationalism of the International Style, European Modernism and the twentieth century art movements of Abstract Expressionism, Op Art, and Pop Art. Graphic-design guru Steven Heller says, “Rudy de Harak is a solid link between American and Swiss modernism. He was an exemplar of minimalist form with a conceptual content. A book on his life and work is sorely needed and long overdue.”

De Harak was also a renowned teacher of design and visual communications since 1952 and was the first Frank Stanton Professor of Design at The Cooper Union School of Art and Architecture in New York City. The Frank Stanton Professor of Design is the first permanently endowed design chair in the United States. He also taught and lectured at many institutions throughout the United States and Europe.

Rational Simplicity: Rudolph de Harak, Graphic Designer is one of those must-have books for design practitioners and design students, as well as anyone who is interested in design history and American mid-century modernism during the twentieth century. This full-color monograph documents de Harak’s pioneering and prolific 50-year career in graphic design, exhibition design, environment and experiential design, industrial design, furniture design, posters, books, and magazines for a wide range of clients, including the Metropolitan Museum of Art, Cummins Engine Company, McGraw-Hill Publishers, and many others. 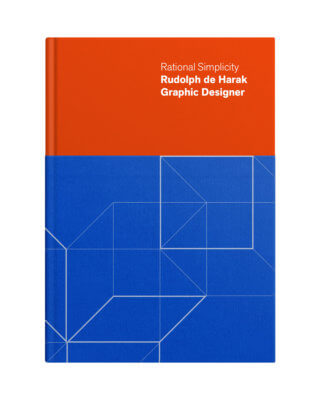 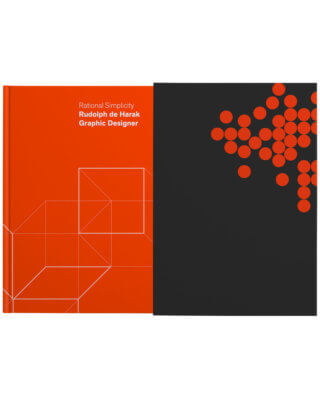 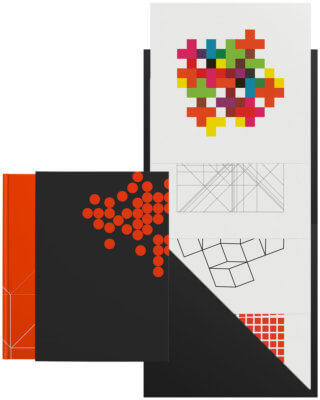 A Life in Design

Rational Simplicity: Rudolph de Harak, Graphic Designer is organized chronologically into six chapters that cover the life and career of Rudolph de Harak from 1924 through to 2002. While the first chapter examines a time period of approximately twenty-five years, the remaining five chapters each examine a period of ten years in his career, as well as his influences and collaborations during those same timeframes.

Each chapter and time period is presented with distinct characteristics and achievements of de Harak’s life and career, and are also intended to provide the reader with a greater understanding of his evolution as a modernist designer within a broader cultural and design context. The narrative and visual content of each of these six major chapters will also be supported by sidebars on various designers, artists, architects, art movements, and typefaces that have had a direct and major influence on de Harak’s life and career.

“I was always looking for the ‘hidden order,’ trying to somehow either develop new forms or manipulate existing forms.” Rudolph de Harak

A modernist and a humanist, Rudy de Harak spent a lifetime considering the fusion of feeling and form, interrogating the many ways design takes flight in the imagination and in the world. This extraordinary volume, long overdue, reveals the mind of a true master, whose curiosity remains a boundless and beautiful gift.

The 408-page full-color monograph, with two additional Pantones, is presented in a generous hardbound format. The specification features a horizontal half-binding that contrasts a textured surface with an uncoated book cloth, echoing the refined design vocabulary that de Harak often used in his work by experimenting with new and dynamic graphic forms paired with tactile materials of various scales.

For true bibliophiles and lovers of the graphic design object, Volume is offering a collector’s edition, limited to 250 copies. The book is covered in a fine linen book cloth and set within a slipcase of contrasting material and motif.

The graphic motif of the slipcase is from de Harak’s album cover for Ivor Novello’s Music Hall Songs, 1960. Each edition is numbered and available exclusively to this Volume presentation.

The graphic motifs of the book cover and slipcase are both drawn from de Harak’s work in the 1960s, which explored the visual dynamics between order and play, clarity and abstraction.

I have a weakness, and de Harak is at the heart of it. I simply cannot enter a bookstore, find a cover designed by Rudy, and place it back on the shelf. This compendium just might be the cure to my design-hoarding obsessive behavior.

Rudy de Harak said that his work put him in the “purist category”. I can’t think of a better description of his work – pure. His record covers and book jackets place him in the first rank of US mid-century graphic designers. It’s been a long wait, but at last we have a de Harak monograph. Rejoice!

A Collection of Serigraphs

De Harak experimented with new graphic forms and optical illusions throughout his career, creating work he then applied to client projects. For Volume, author and former de Harak partner Richard Poulin has made a special selection of four of de Harak’s most outstanding visual experiments reflecting one of the most prolific stages of de Harak’s career. The set will be reproduced only for this Volume publication, and is limited to an edition of 100.

Each image measures 12 x 12 inches (30.5 cm x 30.5 cm) and is printed on a fine archival print paper, numbered and presented in a cardstock portfolio. This is a unique opportunity to own a part of de Harak’s visual legacy that lovers of the art of abstraction will not want to miss.

Technique of Executive Control, book cover, c. 1957. Produced by hand, 200% larger than final size, with a 1/0.50 mm nib rapidograph and black ink on acetate. The image was also used 25 years later for the cover of Print magazine, May/June 1989.

Vivaldi Gloria: album cover, 1961. Produced by hand, in a series of acetate layers, with rubylith cut-outs designated with twelve (12) process colors for each segment of the composition.

I tried to evolve forms that in feeling covered the entire emotional spectrum, and also were impeccable in their sense of order. This to me was Modernism, and toward that end I wanted to create constellations so rich that they in themselves would communicate content.

Design consultant, educator, author, and artist living in Palm Springs, California, Richard Poulin has based his forty-year career on a generalist approach to graphic, environmental, interior, and exhibition design. Since 1986, he has divided his time between professional practice and academia in New York City, as co-founder and design director of Poulin + Morris Inc., an internationally-recognized design consultancy, and as an adjunct professor at the School of Visual Arts and Cooper Union. He is a recipient of a Graham Foundation research grant in design history and his work is in the permanent collections of the Library of Congress, Denver Art Museum, and the Cooper Hewitt Smithsonian Design Museum. Richard has written seven books on design, which have been translated into eight languages.