A loving photographic celebration of the energy-drink-fuelled, furniture-rearranging, multiplayer gaming trend and its nocturnal participants

Before high-speed internet connections and online servers, playing a multiplayer PC game meant hauling your bulky monitors and towers to a friend’s place, convention centre or church basement for a LAN (local area network) party. These sweaty, junk-food-enriched glory days represented the origins of real community spirit in computer gaming’s early days. It’s strange to consider that, as gaming has moved away from physicality towards online spaces, images of gawky teens huddled around computers running Quake or Starcraft have since become subjects of genuine nostalgia.

Many LAN party attendees were early adopters of new tech, so digital cameras abounded at these events. The photos produced by these devices were often low-resolution, blurry and badly lit. In their imperfections and limitations, they represent the messy, ad-hoc approach to computing typical of the LAN party – network cables snaking across recreation centre floors, a monitor perched on a kitchen counter, burned CD copies of games labelled in marker pen.

True to the community spirit of the book’s contents, LAN Party author Merritt K pitched the idea for this publication through Twitter and received over 100,000 likes. Merritt has now partnered with Volume to bring her sought-after idea to life, creating a beautifully produced, high-quality photobook crowdfunded as a special edition, to document a well-loved era in gaming history. 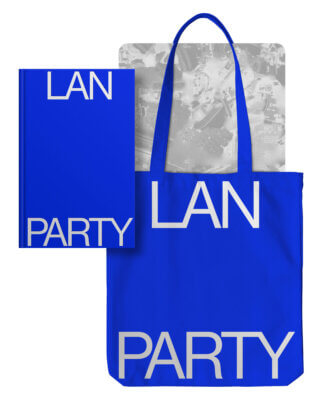 LAN gatherings of the late 1990s and early 2000s evolved from the necessity for multiplayer gamers to come together at physical meet-ups, lugging their bulky computers or game consoles along with them.

In addition to documenting the nostalgic era of LAN parties, the photographs in this book are unique artefacts of the peculiar cultural and technological moment, when gaming was tipping over from niche hobby to mainstream obsession. They reveal not just the home décor and personal fashion styles at the turn of the millennium but a different world, one that existed before the internet took shape and we started carrying it around with us in our pockets.

Many of the photographs included in LAN Party were taken using early digital cameras at limited resolution. To make these images look their best in print, we have employed AI-enhancement software – an emerging technology that allows the upscaling of low-resolution images with spectacular results – to make the first full-size photobook on this beloved subculture.

Me and my mates in Rio, around ’99, would carry our PC towers, monitors, and backpacks of cables, keyboards and tech paraphernalia to one of our apartments in Ipanema and set up wherever we could. There’d be maybe four to six of us…. We still talk about epic Starcraft battles, insane coop Quake run-throughs and the day Diablo II came out and we played twelve hours straight!

Our LAN parties were this strange alternate universe where the captain of the football team hung out with the science fair nerds. We even had cheerleaders come to our LAN parties.

In addition to this exclusive edition on Volume, we are offering a deluxe set, complete with a limited-edition gamer-sized mousepad and custom tote bag.

The mousepad is a bespoke design by Paris-based design studio Atelier Müesli, designers of the book. Inspired by digital collage – something between glitch art, computer plans and synthetic kitsch – the featured illustration is an abstract composition of objects that represent LAN culture (computers, pizza, soda, cables), which have been 3D modeled and worked together into a single-tone image. It measures 250 x 270mm, made from a durable PU leather material printed in silver ink, able to withstand a heavy pelting of Cheetos dust and perfect for any intense Quake session.

The tote bag is a custom-made limited edition, exclusive to this campaign. It is 400 x 450mm, ideal for carrying a game console, and features the bold typography used in the book. The bag’s 245gsm electric ‘Hyperlink blue’ cotton-polyester material is accented by the screen-printed white design.

Merritt K is a writer, editor and podcaster living in New York. She is the creator of Forgotten Worlds, a video series exploring Y2K-era internet culture, as well as several works of interactive fiction. Regrettably, she never owned anything resembling a gaming PC during the heyday of the LAN party.