From the mid- to late 1990s, Paul Burgess was invited by Jarvis Cocker to document the British band Pulp, taking photographs during video shoots, live gigs and other events for what has become one of the landmark albums of the period, This Is Hardcore. Written and designed by Burgess and Louise Colbourne, Hardcore contains a candid selection of previously unseen images of the band, behind the scenes and on set, of the four main video shoots made to promote the album. Twenty-five years have passed since Pulp released this extraordinary album, and this book holds up a mirror to the ingenious creative processes and characters behind the seminal record.

With carefully curated images from Burgess’s archive, Hardcore also includes quotations and interviews from then and now by the video directors, band members and other artists involved with the album. The book contains contributions from Doug Nichol, John Currin, Stephen Mallinder, Sergei Sviatchenko, John Stezaker and Florian Habicht, all of whom have a connection to the album, the band or the era. There are also visual responses from a selection of younger artists and designers, such as Alexa Vieira, who have been inspired by Burgess’s photographs and the band’s legacy. 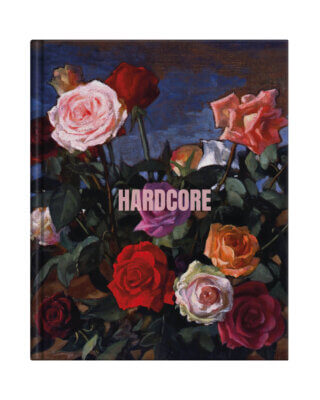 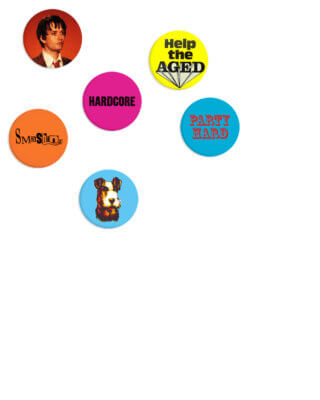 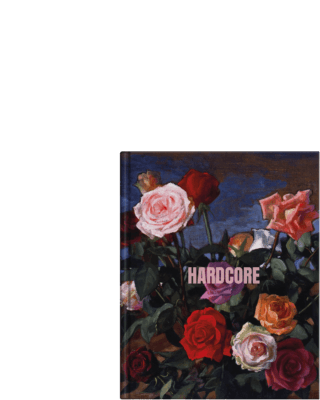 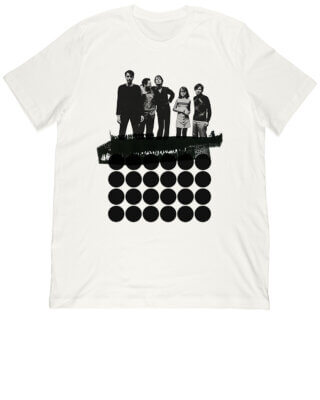 Designed by Paul Burgess and Louise Colbourne to act as a container, or a kind of exhibition space, for an artful selection of  photographs and visuals, as well as newly commissioned artworks and essays, Hardcore will be a square-back hardback volume, bound in a textured stock featuring the artwork ‘Rosebush’ (2003) by American artist John Currin whose paintings feature in the ‘Help the Aged’ video. The title typography, which will be stamped in pink foil, was created in the Letterpress department at the School of Art and Media at the University of Brighton with support from Rose Walker.

Both the Collector’s and Hardcore reward sets include an alternate version of the book housed in a handmade slipcase, bound in a tactile burgundy material and stamped with pigment foil.

Pulp are one of the true art-school bands, so the intention of the book is not to exist just as a document of the band, but to act as a creative catalyst and shine a new light on the album This Is Hardcore and the era that was the late 1990’s.

As part of the campaign we have on offer a selection of additional rewards, created exclusively to accompany the book. The Hardcore T-shirt combines a portrait of the band taken by author Paul Burgess the year that the album was released, elevated with his signature bold, expressive graphics. Only available with this edition, it makes a strong design statement in monochrome.

The set of six badges is also exclusive to this edition. Each relates to one of the four album tracks that the book blows open for the reader. The dog’s head references the T-shirts that dancers wore in the video for ‘Party Hard’, whilst the ‘Hardcore’ badge features the same wooden letterpress type that adorns the Collector’s and Hardcore Edition slipcases. A reproduction of an original ‘Help The Aged’ charity badge from the 1970s is included as a reference to one of the album’s best-loved songs, whilst the ‘Smashing’ badge celebrates the London club night of the same name that Jarvis frequented in the 1990s. The last badge features Jarvis himself, photographed by Paul Burgess, and the song title – and invitation to let loose – ‘Party Hard’.

The 210 × 148mm 3D lenticular photograph of Jarvis was taken by Burgess on the set of the ‘This is Hardcore’ video shoot at Pinewood Studios, using a ‘plastic 3D camera’. As the viewer tips the image, Jarvis’s hand moves in front of his face. Limited to an edition of just 275, it is only available with this campaign.

Pulp was the perfect name for the band because this was an attempt to find meaning in the mass-produced and throwaway world that was, after all, what we were surrounded by on a daily basis. To sift through and find some beauty in it all. Take a look – it is there.

Jarvis Cocker for the Guardian

Author Paul Burgess designed the prints series as simple bold portraits, combining some of his best photographs from the Hardcore era with simple graphic elements.

Paul Burgess is a freelance designer, photographer and author. He was course leader for the Illustration programme at the University of Brighton from 2010 to 2015 and studied at Camberwell School of Art and the Royal College of Art. Burgess is also a collage artist and his work has been featured in many UK and international publications and exhibitions.

Louise Colbourne is course leader for MA Graphic Design at the University of Brighton. She also works as an independent creative director, working on collaborative ventures which often re-present archival material in new art forms. These projects culminate as programmed events, curated exhibitions and publications, and include a wide selection of international artists, musicians, and designers.