The début monograph of metamodern imagery from the celebrated 3D artist.

In the summer of 2015, self-taught digital artist Frederic Duquette, otherwise known as Fvckrender, began posting one 3D artwork on social media every day. After a bike accident left him with pain and numbness on his left side, he was waiting tables and watching software tutorials online in every spare moment. He quickly built up a unique body of work and distinctive style, which has seen him garner numerous fans. The daily posts have become an ever-expanding visual diary, a creative database and a futuristic slideshow of hallucinatory imagery.

Surrealista is the first monograph from this provocative Montreal-based creative. It brings together his complete works for the first time, clearly demonstrating its evolution from his early sepia-toned renderings towards mind-bending and eye-opening miniature worlds and a preoccupation with surface and texture.

“I like playing around with texture and form, for example giving the texture of glass to a spider or a flower,” he explains. “It’s not something you would see in real life and that’s what I like about it. I’m trying to create elements based on things you see every day, but with textures that you don’t see every day.”

Using Cinema 4D software, and without any formal design education, Fvckender deliberately ignores the mainstream whilst embracing emerging technologies such as augmented reality. His slick, stylised, but dystopian aesthetic resonates with our time. It has seen him collaborate with musicians, including Flying Lotus, TOKiMONSTA and LilNasX, as well as produce celebrated commercial work for editorial and advertising. Surrealista celebrates the vision of a true internet-age artist at the start of his career. 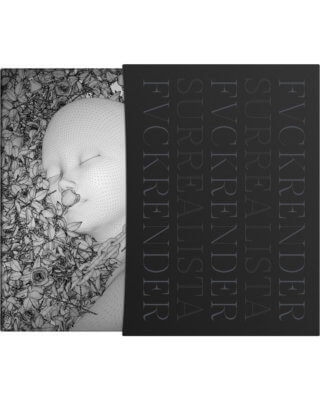 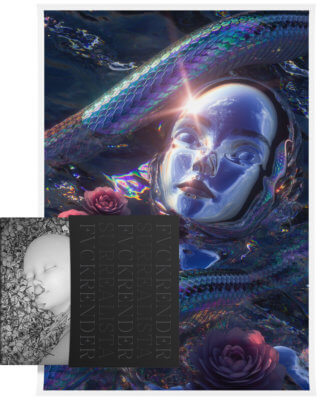 As well as showcasing the complete works of Fvckrender and offering an exclusive behind-the-scenes insight into the 3D artist’s working processes, Surrealista is designed to be a covetable 3D object in its own right.

The book comes complete with Swiss binding, with the book-block edge covered with a fabric tape, and a tipped-in cover image. The lavish presentation includes multiple paper stocks, with cut-down text sections printed in Pantone inks. The board lining is printed with a wireframe flower design in black and silver, creating a visual reference to the way in which the artist works.

Surrealista draws out many interconnected themes that will resonate with a contemporary audience, as wide-ranging as anxiety, imagined futures, the digitization of nature, hyperreality and the surreal. Inside, backers will find an endless source of design inspiration to pore over, and the opportunity to learn more about Fvckrender’s attention-grabbing style, in his own words.

Fvckrender’s vision is a surreal twist on the everyday. At the core of his aesthetic the attention to detail towards world-building is exceptional. These are imaginary worlds constructed by artistic talent and technical ability that will provide an endless source of inspiration to many.

I believe his creations are a dream world brought to life, in the best way possible. On first look you can feel the ambience, and you can sense the atmosphere he’s created as if you were truly there.

Volume’s special edition of Surrealista features an original wireframe image produced exclusively by Fvckrender overprinted in black on metallic silver ink. This high-spec edition of the book will be housed in a handmade slipcase, which features a unique curved opening.

Only available during the funding period, each edition will be numbered and signed by the artist, making this an essential addition to any collector’s library and the edition that true fans of Fvckrender’s aesthetic will want on their bookshelf.

Backers of the print reward can choose their favourite of Fvckrender’s three most popular images as a print to hang on their wall. Each offers a different take on the artist’s signature subversion of everyday forms and iridescent finishes.

Digitally printed on high quality uncoated archival paper, the prints are all sized 50 x 70 cm and are shipped to backers in a heavyweight archival tube.

Fvckrender’s eye for the surreal and ethereal has always been awe-inspiring. He is a visual architect of dreams that people would never be able to articulate in real life.

Fvckrender is the pen name and Instagram handle of Frederic Duquette, a digital artist living and working in Montreal, Canada. He has built up a sizable following for his 3D artworks that transport the viewer to imaginary worlds, and his decidedly modern aesthetic has seen him collaborate with musicians many of whom he considers friends, including TOKiMONSTA, Jai Wolf and Grimes. Last year he collaborated with Hajime Sorayama on video artwork for Dior and he has produced editorial work for Hypebeast and Harper’s Bazaar China amongst other titles. Duquette began creating 3D artworks after a bike accident left him unable to pursue that passion, and has been uploading daily posts to the delight of his fans ever since.